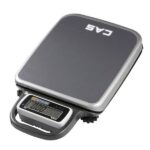 CAS PB Portable Bench Weighing Scale is a light weight and easy to carry portable OIML-approved bench scale. This portable bench scale is perfect for weighing applications in the field that require a legal for trade scale such as gyms, hospitals, farmers and couriers

CAS PB Portable Bench Weighing Scale is a light weight and easy to carry portable OIML-approved bench scale. This platform scale operates on either AC adapter or battery power. If you placed a large object on the weighing platform and it obstructs the view of the weigh indicator don’t fret the large LCD display is also detachable for easy viewing. This portable bench scale is perfect for weighing application in the field that require a legal for trade scale.

CAS PB portable bench scale offers a simple weighing solutions and is a dual range weighing scale. When weighing objects from 0 to 30kg the scale increments in 50g divisions. Once you go above 30kg up to the maximum weighing capacity of 200kg the resolution drops to 100g graduations.

This scale is popular with farmers picking crops in the field like tomatoes, peppers, mushrooms and other fruits and vegetables. When farmer owners are paying their pickers by weight they need a portable legal for trade scale to weigh boxes in the field. They also need a scale for packing in the field so each carton weighs the specified weights per carton. Since there is no power typically in the field they require a battery operated digital scale.

Additional applications would be for a laundry mat that charges by weight to clean cloths; A hardware stock for selling animal feed or grass seed; Pet Store for selling dog food; courier companies, etc. There are hundreds of other weighing applications we can probably think of were you are selling goods by weight and the Weights & measures officials has can to your store to tell you that your not in compliance and need a Legal for Trade Scale and the CAS PB Scale will probably meet the requires.

There are no reviews yet.

You've just added this product to the cart: